Costa Rica has a little bit of everything for every kind of traveler. It is one of the most biologically diverse countries on earth, with volcanos, remote beaches, rainforests, exotic wildlife, charming small towns, rivers, adventure activities, etc. Costa Rica is our very first proper international vacation. We planned this trip months in advance. We booked a package tour with Ecoterra, spent months researching about currency, weather and other little things. When the time finally came, “Hurricane Otto” happened.

Day 1: On a red eye flight from LAX we arrived in San Jose at 8:30 on a Sunday morning. Immigration process was very smooth and didn’t take very long. Even though we read that US dollars were accepted all over Costa Rica we still exchanged colones at the airport, just in case. And we also purchased a “Kolbi” prepaid sim as we didn’t have an international roaming plan. All transits were included in the trip package, so our ride to the hotel waited for us right outside the airport. It was less than a 30min ride to Park Inn by Radisson. Since we arrived early for check-in and our room wasn't ready yet, we decided to leave our luggage in the hotel locker and take a walk on the streets. The hotel was located in a very quiet residential neighborhood with few small businesses that were closed because it was a Sunday. Our hotel was the only busy place with tourists checking in and out, everything else around felt very still and gloomy.

San Jose - view from our room

Day 2: At 6am, we boarded a bus to Tortuguero. The streets were already busy as people got on with their lives and businesses began to open. Within minutes, we were out of the city and the laid back vibe kicked in as we journeyed through small towns, miles of plantations, fields, rivers and tropical jungles. It rained on and off. Costa Rica has 2 seasons that are defined by the amount of rainfall it receives, and the locals call it WET and VERY WET seasons. In 2 hrs we stopped at El Ceibo restaurant in Guapiles for breakfast and to use the facilities. Guapiles is a small town which is usually a pit stop for tourists taking that route. The breakfast was an adequate buffet of typical Costa Rican dishes - Rice and beans, eggs, a type of meat, fried plantains, breads and pastries, variety of tropical fruits, juices and Costa Rican coffee.

Scenery on the way to La Pavona / Costa Rican breakfast

We got back on the bus and rode for another 2 hours to the pier at La Pavona. The fact that Tortuguero was accessible only by boats made this trip all the more exciting for us. Without much delay we loaded our luggage, put on our life vests and sailed off deeper into the canals. We spotted couple of crocodiles and birds on this ride.

Enroute to Tortuguero / Spotted a Crocodile

Tortuguero is nicknamed the “Amazon of Central America” because of its navigable canals that ran through the rainforest. As per Julio, our tour guide, locals call the canals “chocolate waters” because of its color.  Pachira lodge, our stay in Tortuguero, was located on the edge of the canal and surrounded by the jungle. The rooms lacked all the fancy amenities, were minimally furnished but comfortable. It was a pure jungle experience and we couldn’t ask for any better. We had an hour to refresh and grab lunch. It was a shared table set up at the restaurant so we chatted away with other lovely tourists and shared interesting travel stories.

That afternoon, we sailed off in the narrow canals of Tortuguero National Park for our canal tour, this time at a much slower speed. Our guide effortlessly spotted animals and birds on the tree branches. A few times he pointed at dark spots very high up on the trees which were 2 toed and 3 toed sloths. They rested comfortably at a height, we never got a closer look at them during this trip. ​

After dinner Julio surprised us with a night walking tour which was not part of our itinerary. The uncertainty of what we were going to encounter in the dark jungle made us very nervous, but we were thrilled by this opportunity. We saw many creepy spiders in different sizes and shapes, also Olinga and Coati (I think), not much luck with frogs and snakes. The most thrilling moment was when we stopped at a resting area half way through the trail, switched off our flashlights and just stood there in silence taking in the beauty of the jungle in its complete darkness. Music created by the mixture of unique sounds of nature and the whole experience felt very pure and peaceful beyond words.  The jungle was alive at night. Though loud because of the open windows, it was very relaxing and we caught a good night’s sleep. Until howler monkeys raised an alarm precisely at 4:00am.

Day 3: Life began very early in Tortuguero as well. Even before sunrise we heard the hotel staff begin their cleaning and sweeping. Tourists made some noise as they headed for their early morning canal tours. Later that morning, by the pool, Julio had our undivided attention when he announced that a hurricane headed towards us and we were to evacuate asap. Strangely, he wanted to finish the day walking tour and village tour first. We did not find the day walking tour to be as exciting as the night, because there was no fear or surprise anymore. It was quieter and calmer than at night. The rest area did not look as scary. We spotted some wildlife during this walk as well.

Soon after the walk we took a boat to get to the other side of the canal where the village was located. It was a charming colorful village with a Caribbean laid back vibe. The place was half deserted and those that remained were preparing to evacuate. Tortuguero beach, an easy walk from the dock, is one of those quiet palm lined beaches, a great nesting place for the turtles.

Read more about our Journey to Tortuguero.

​As soon as we got back to the lodge, all tourists got busy calling their respective tour agencies. The staff at Pachira arranged for an early lunch and made sure we left comfortably. Many boats went in and out of the canals helping villagers evacuate and get to safe land. It was a long journey from Tortuguero to La Fortuna. 2 hrs on the boat to La Pavona, 2.5hrs on a bus to Guapiles and 3.5hrs on a tourist van to La Fortuna. It was way past sunset when we arrived at Casa Luna Hotel and Spa. And our bodies begged for rest. ​

Day 4: Never mind that the itinerary got messed up, we were very excited for the extra day in La Fortuna. At the lobby, we booked a hanging bridges tour for day 6 and made spa reservations for that afternoon. We had some time to kill, so we set about exploring the beautiful hotel. There was a short dense loop trail behind the property that passed by a flowing river half way through. After the hike, we chased birds and photographed some flowers.

We had the best possible spa experience ever. The spa rooms had an open jungle view. Nothing beats a great massage while listening to the sounds of birds, rain and river.

Loop trail at the hotel / One of the visitors

Day 5: Arenal Volcano National Park and all other tours were shut down as the govt. declared national emergency. So there goes our zip-lining activity. Ecoterra office was located just behind the hotel. We checked about the weather forecast and if the situation was going to be any different on day-6 and we were informed that zip line activities and the park would still be closed. So there goes our hanging bridges tour as well. We were somewhat disappointed but helpless at that point.

The rest of the day, we followed the same routine as day-4, chased birds, hiked the trail, photographed flowers and drank pina coladas. Btw, they were the best pina coladas we ever had.

Day 6: The rain stopped and the sun was up. The hotel was great and all, but we were bored to death. We couldn’t take one more day in there doing nothing. Just as we sat down for breakfast, our tour operator came over and informed that the zip lines were open. What a relief!!! 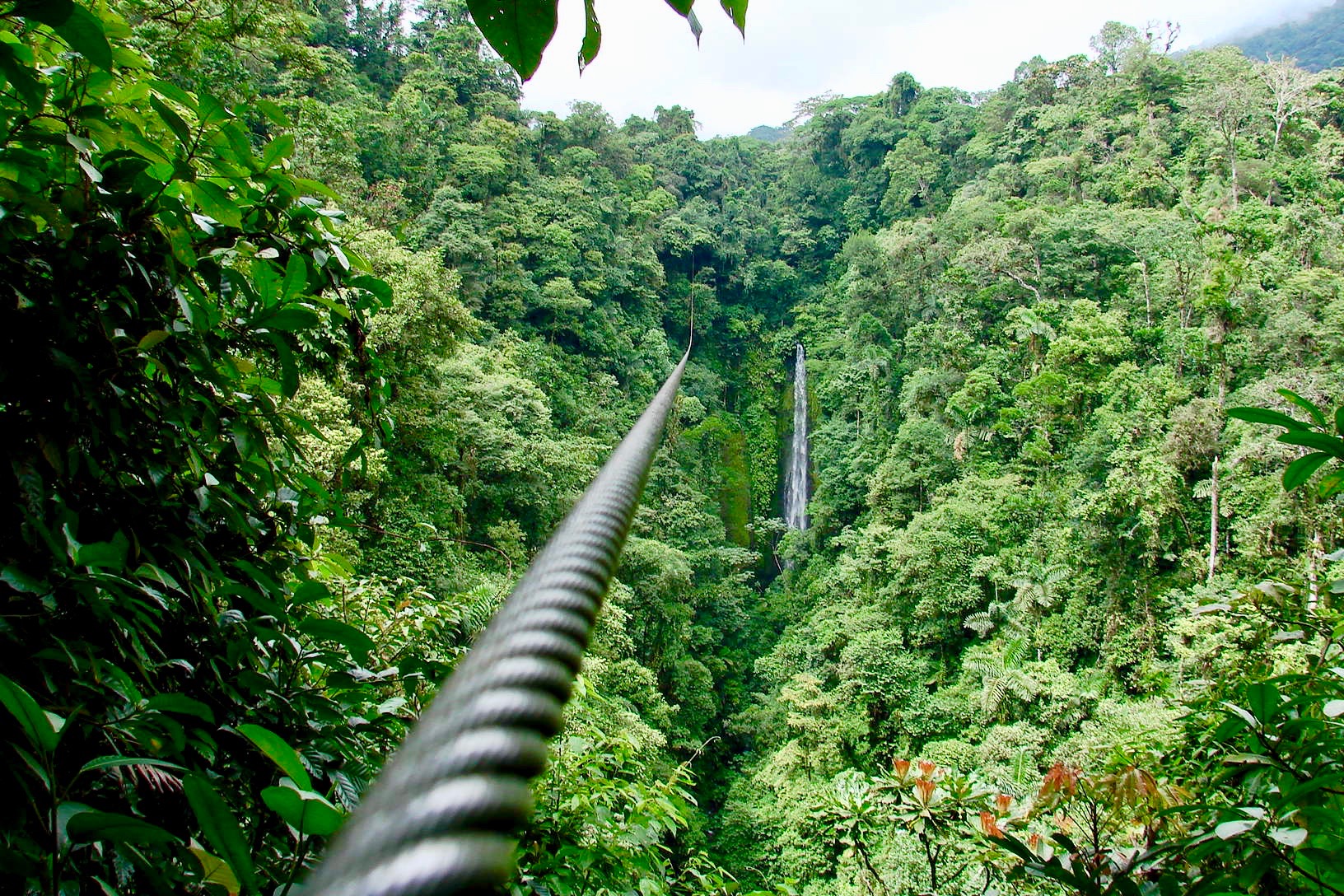 When we arrived at Arenal Mundo Adventura, the guides went over a safety briefing and gave each our own equipment to carry. We got on a tractor and rode to our first cable. It was our first time ever zip-lining. We let go of all our fears and zipped through the forest cable after cable,  the longest being 980 mts. The view of the forest and waterfalls was breathtaking and the whole experience was incredible. Hardest part of it all was hiking to the next cable while carrying those heavy harnesses around our waist. ​After zip line, we visited the Maleku Cultural Rescue Center. A Maleku Indian community representative spoke to us about their language, beliefs, culture and traditions. We got to taste their traditional drink “Chicha” cocktail which is fermented corn, water and sugar.

Before taking our ride back to the hotel, we checked out the display of butterflies and poisonous frogs located next to the office.

That afternoon we had the Arenal Volcano walking tour. Since the national park was still closed we hiked a private trail beside the park known as “Forest trail of 1968”. It was a steep but easy hike for the most part. We learned a little bit about the volcano's history and also about some of the jungle’s plants and their medicinal/culinary benefits. After the hiking tour we were dropped off at Paradise Hot Springs for a soak and dinner.

Day 7: Out trip came to an end and it was time to leave the country. Our ride to San Jose airport arrived at 8am. It was a grueling 21 hour journey back home.

We never had to make so many changes to our itinerary even when we planned our own trips. Even though it did not go fully as per schedule, we still loved and enjoyed every bit of it. Costa Rica is a beautiful country and we only saw very little of this vast place, but definitely an incredible trip to remember.

Read all our posts on: #CostaRica